The reason behind it is that the British pound has been falling since the BREXIT, as a weaker pound will increase profits of multinational corporations that are listed on the index, when they convert their earnings to pounds.

It is kind of a catch 22 situation, because as the pound goes down the FTSE goes up.  If you are currently investing in the UK stock market, it’s great, but not too good if international business needs to be done. A weaker pound, will give you less for your money in a foreign country.

The Mining, Banking and Health Care Equipment & Services had a good trading day.

Morrison Supermarkets was one of the main gainers of the market as the fourth largest supermarket in the UK did better than expected in the Christmas trading. The results indicate that the recent Christmas trading was the best performance in the last seven years. The Share price was up 4.2 %.

However, Tesco, the UK’s number one supermarket has emerged the winner with the fastest growing sales among the sector over the Christmas period. Tesco was up around 5% at the close of yesterday’s trading.

In New York, USA, THE Dow Jones did reach 20,000 – a new high but closed below the figure at the end of yesterday’s trading.

President Elect Donald Trump met with Jack Ma – CEO of Alibaba and promised to bring 1 million jobs to America. I believe trading deals and brining jobs back America as well as creating Jobs will be a strong point for Mr Trump.
Alibaba’s earnings for last quarter are due out on January 24.

Back on President Elect Trump; he has appointed his son in law Jared Kushner as his senior adviser. Mr Kushner played a key role in Mr Trump’s campaign for the election, and is married to Ivanka Trump.

Also from America, the Dow Jones Industrial Index closed just below 20,000, which is an all-time high, I believe the week approaching, we will see the Dow  go above the 20,000 mark for the first this in history. This could be classed as a positive for both the outgoing President Obama, and for President elect Trump.

The figures that came out on last Friday (Non-farm payrolls) show that 156,000 jobs to the labour market, but the real good news was that the wage growth was the strongest since 2009. Good news for the outgoing President Obama, which would add to his legacy.

Remember, what happens in the US Market has an impact on the UK Market.

This is great opportunity for all our successful students who have completed their training with us here at FutureTrend to meet top industry participants and join in discussion with some of its panels speakers.

1. We accumulate information—buying books, going to seminars, attending courses and researching.
2. We begin to trade with our “new” knowledge.
3. We consistently “donate” and then realize that we may need more knowledge or information.
4. We accumulate more information.
5. We switch the currencies or commodities we are currently following.
6. We go back into the market and trade with our “updated” knowledge.
7. We get “beat up” again and begin to lose some of our confidence. Fear starts setting in.
8. We start to listen to “outside news” and to other traders.
9. We go back into the market and continue to “donate.”
10. We switch currencies and commodities again.
11. We search for more information.
12. We go back into the market and start to see a little progress.
13. We get “overconfident,” and the market humbles us.
14. We start to understand that trading successfully is going to take more time and more knowledge than we anticipated. Most people will give up at this point, as they realize work is involved.
15. We get serious and start concentrating on learning a “real” methodology.
16. We trade our methodology with some success but realize that something is missing.
17. We begin to understand the need for having rules to apply our methodology.
18. We take a sabbatical from trading to develop and research our trading rules.
19. We start trading again, this time with rules, and find some success, but overall, we still hesitate when we execute.
20. We add, subtract, and modify rules as we see a need to be more proficient with our rules.
21. We feel we are very close to crossing that threshold of successful trading.
22. We start to take responsibility for our trading results as we understand that our success is in us, not the methodology.
23. We continue to trade and become more proficient with our methodology and our rules.
24. As we trade, we still have a tendency to violate our rules, and our results are still erratic.
25. We know we are close.
26. We go back and research our rules.
27. We build the confidence in our rules and go back into the market and trade.
28. Our trading results are getting better, but we are still hesitating in executing our rules.
29. We now see the importance of following our rules as we see the results of our trades when we don’t follow the rules.
30. We begin to see that our lack of success is within us (a lack of discipline in following the rules because of some kind of fear), and we begin to work on knowing ourselves better.
31. We continue to trade, and the market teaches us more and more about ourselves.
32. We master our methodology and our trading rules.
33. We begin to consistently make money.
34. We get a little overconfident, and the market humbles us.
35. We continue to learn our lessons.
36. We stop thinking and allow our rules to trade for us (trading becomes boring but successful), and our trading account continues to grow as we increase our contract size.
37. We are making more money than we ever dreamed possible.
38. We go on with our lives and accomplish many of the goals we had always dreamed of and in return now we are able to help others. 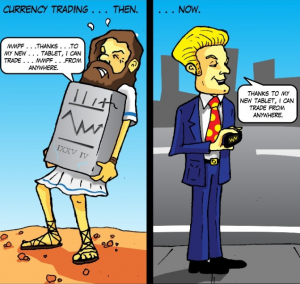 Click the link below for details about the Bloomberg’s FX12 Summit in London on 16 October 2012 at 3:00pm: REGISTER Hurry!!! Seat are limited.